On Saturday, students met at Rockwall-Heath High School, where they performed live over Zoom for a panel of professors from the university, including Joe Eckert, Kyp Green, and Joey Carter. 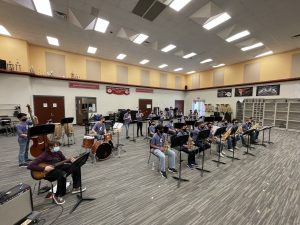 The students rehearse once a week after school and include students from Honors, Symphonic, Concert bands, and Chamber Orchestra.

“It has been a blast working with these amazing kids,” said Cain assistant band director Preston Prior. “They have such incredible talent and work really hard.”

“I love playing in jazz band,” said lead Alto Saxophone Franco Villaescusa-Feuchter. “I am so glad we were able to do Jazz Band this year and even perform for the TCU Jazz Festival.”

The band played three pieces for the panel including “A Minor Case of the Blues” by Rick Stitzel, “Bésame Mucho” by Consuelo Velazquez and Sunny Skylar, and the theme from “Sesame Street” by Bruce Hart, Joe Stone, and Joe Raposo. After each piece, the professors offered feedback and suggestions, and insight into the Jazz genre.

“The swing feel cannot be accurately composed,” said Professor Green. “That is something that has been passed down through the jazz legends and is a quintessential element of the jazz vernacular.” 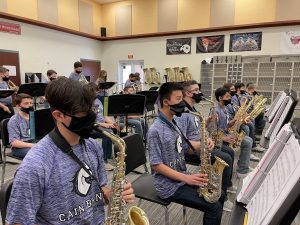 The Cain Jazz band was one of only two middle schools to perform at the TCU Jazz Festival and one of only 15 bands in total.

The Cain Jazz band was one of only two middle schools to perform at the TCU Jazz Festival and one of only 15 bands in total. The rest of the bands were high school groups, including the Rockwall-Heath High School jazz band.

“I am so glad we were able to start a jazz program at Cain,” said head director Trevor Ousey. “Our program is stronger because of it.”

The Cain Jazz band will perform again at the band Spring concert and is also looking into additional virtual festivals in April and May.