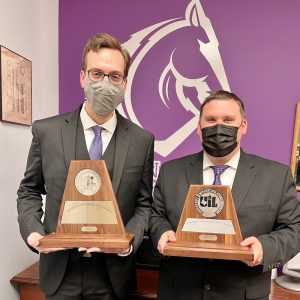 The Cain Middle School band program has a lot to be proud of, courtesy of two Sweepstakes awards and a historic Concert Band performance at the Region 3 UIL Concert and Sight-Reading Evaluation.

The day began with a performance by the Cain Middle School Concert Band, who returned to UIL Contest for the first time since 2015. Under the direction of Preston Prior, the band earned an Excellent Rating on both their stage performance and in the sight-reading room.

“Concert Band made an incredible first showing at UIL,” said Prior. “They had the highest score of the day in their classification. They have worked so hard – I am so proud of them!”

Later in the day, the Cain Middle School Symphonic Band, also under the direction of Preston Prior, received straight Division 1 ratings from all three judges during the stage portion and all three judges in the sight-reading room resulting in a Sweepstakes award. 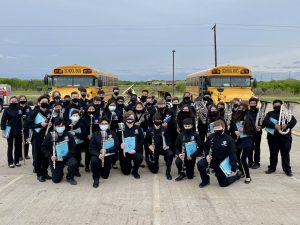 The Concert Band performs at UIL for the first time since 2015.

A Division 1, or Superior rating, is the highest rating that each judge can give to the performing group.

“These students worked incredibly hard all year to earn this award,” said Trevor Ousey, director of bands at Cain Middle School. “This non-varsity band of mostly 7th graders played a challenging program of grade 2 literature and received high marks from all of the judges. That says a lot about the direction our band program is heading.”

“Symphonic Band went above and beyond,” said Prior. “They took harder music than required of them and knocked it out of the park. I am astounded by how amazing these student musicians are!” 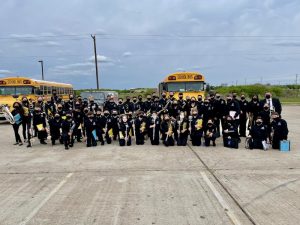 This marks the 2nd consecutive Sweepstakes award for the Symphonic Band, and the first time in over a decade the band has performed music a grade level higher than required for UIL Contest.

Finally, the Cain Middle School Honors Band, under the direction of Trevor Ousey, received straight Division 1 ratings from all three judges during the stage portion and all three judges in the sight-reading room resulting in another Sweepstakes award.

“We are thrilled with the results,” said Ousey. “The Sweepstakes is a result of the hard work and discipline of these students. In one of the most challenging years for everyone, the students rose to the occasion and delivered a truly memorable experience for all involved.” 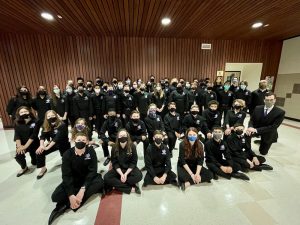 Honors Band earns a Sweepstakes award and high praise from all of the judges.

“We also had a lot of tremendous clinicians and mentors along the way,” added Ousey. “I want to personally thank Melodianne Mallow and Marty Nelson, who continue to work with the students in our pursuit of excellence.”

The Cain Band will finish the year with auditions, a solo contest, and a spring performance. The Honors Band will also record their UIL program to submit for the Mark of Excellence National Wind Band Honors competition later this summer.