The Cain Middle School band program has a lot to be proud of courtesy of two Sweepstakes awards this week at Region 25 UIL Concert and Sight Reading Evaluation.

On Tuesday, March 26th, the Cain Middle School Symphonic Band traveled to Wylie East High School to perform in class CCC Non-Varsity. Under the direction of Ellen Chmura, the band received straight Division 1 ratings from all three judges during the stage portion and all three judges in the sight reading room resulting in a Sweepstakes award. A Division 1, or Superior rating, is the highest rating that each judge can give to the performing group.

This is the first Sweepstakes award for the Symphonic Band since 2010 and the first time the band has received all Division 1 ratings since 2006. 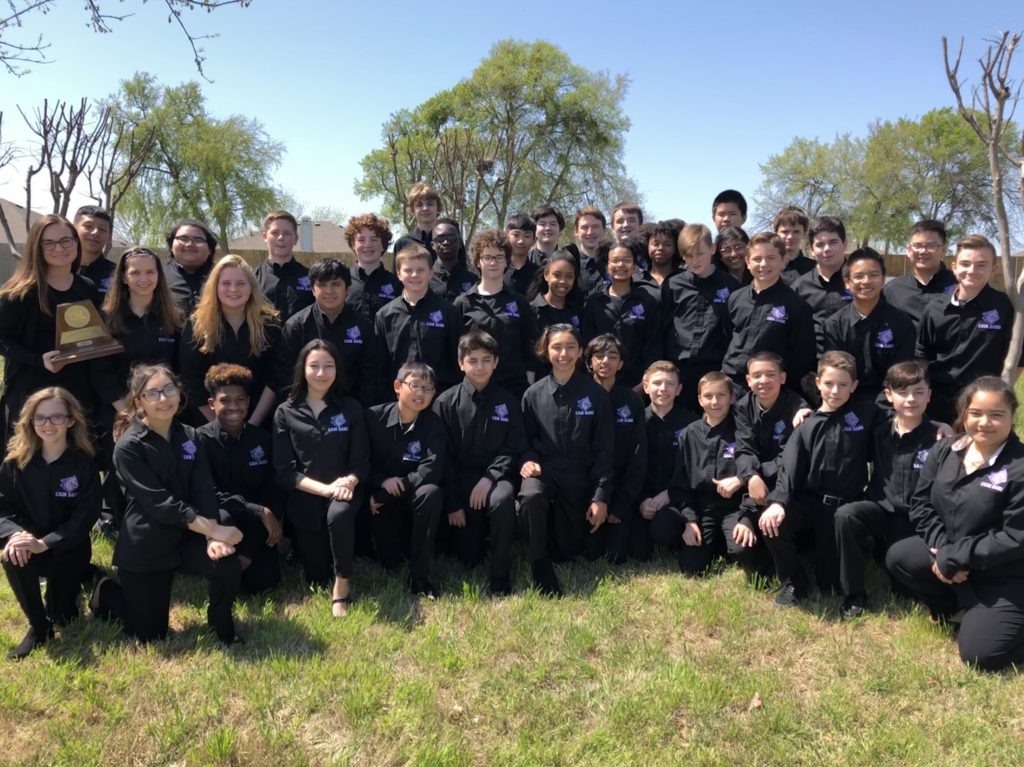 On Wednesday, March 27th, the Cain Middle School Honors Band also traveled to Wylie East High School to perform in class CCC Varsity. Under the direction of Trevor Ousey, the band received straight Division 1 ratings from all three judges during the stage portion and all three judges in the sight reading room resulting in another Sweepstakes award.

Overall, this is the first time in 14 years that both Symphonic and Honors bands at Cain Middle School have earned these high marks at UIL Contest.

“We are absolutely thrilled with the results,” said Trevor Ousey, Director of Bands at Cain Middle School. “The kids have worked incredibly hard this year and have earned every Superior rating this week.”

“It has been a journey,” said Ellen Chmura, who is in her first year as Assistant Director at Cain Middle School. “These students have pushed themselves and each other to reach this level of excellence.”

In addition to Mr. Ousey and Ms. Chmura, the band would also like to thank all of the high school staff and private lesson teachers for their support, especially Ben Sumrak and Rod Kosterman at Rockwall-Heath High School, and Chris Kosterman, Director of Fine Arts for Rockwall ISD.

“We also had a lot of tremendous clinicians and mentors along the way,” added Ousey. “I want to personally thank Marty Nelson, Rob Chilton, and David Puckett, all current and former band directors in our area, who continue to work with me and the students in our pursuit of excellence.”

The band will finish out the school year with various recruitment concerts, performances, and their Spring Concert on May 22nd.