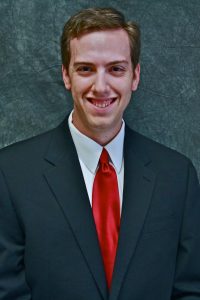 Trevor Ousey is the director of bands at Cain Middle School, a position he has served since 2016

Cain Middle School band director Trevor Ousey has been nominated for the 2018-2019 national LifeChanger of the Year award.

Ousey is being recognized as a LifeChanger for his dedication to his school community. Every day, Ousey travels to several elementary schools to teach band and impact the lives of students. He models a passion for learning and shares his art with those around him.

Ousey was nominated by his colleague, Julie Woodard.

“He is truly a gift to all those who have the pleasure of working with him; from the students he teaches, to the greater community he serves,” said Woodard. “I’m humbled and honored to be a colleague of Mr. Trevor Ousey.”

“Mr. Ousey has been an important figure in my daughter’s band career,” said Deanna Saunders, the parent of a student. “He noticed her outstanding potential and found a place in the band where she has flourished. He has definitely been a LifeChanger for my daughter.”

About LifeChanger of the Year

Sponsored by the National Life Group Foundation, LifeChanger of the Year recognizes and rewards the very best K-12 educators and school district employees across the United States who are making a difference in the lives of students by exemplifying excellence, positive influence and leadership.

Winners are announced via surprise award ceremonies held at their schools. The grand prize finalists will also be honored at a national awards ceremony in May 2019 in Hawaii, where the Grand Prize Winner will be revealed.

Winners are chosen by a selection committee comprised of former winners and education professionals. Nominees must be K-12 teachers or school district employees. To be considered for an award, nominees must

To view Mr. Ousey’s LifeChanger of the Year nominee profile, or to nominate someone from your school community, visit www.LifeChangeroftheYear.com.