Congratulations to the band for outstanding performances at UIL Evaluation 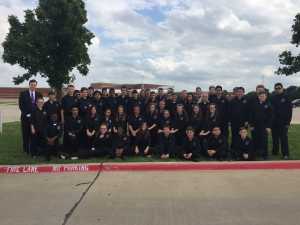 Congratulations to the Cain Middle School Symphonic and Honors bands for receiving Excellent and Superior ratings at the Region 25 UIL Concert and Sight Reading Evaluation.

On Thursday, April 20th, the Symphonic Band, under the direction of Thomas Kramer, traveled to Wylie East High School to perform for a panel of judges. Overall, the band received “Excellent” ratings on stage and in sight reading.

“The kids have improved tremendously since the start of the year,” said Mr. Kramer. “I am proud of their performance and the work they have put into preparing for this year’s contest.”

On Friday, April 21st, the Honors Band, under the direction of Trevor Ousey, also traveled to Wylie East High School. The band received an “Superior” rating on stage and an “Excellent” rating in sight reading. The band was one judge away from receiving the coveted Sweepstakes award.

“Even though we were off by one rating,” said Mr. Ousey, “I am extremely proud of the band and their performance. We had some incredibly musical moments on stage today.”

“The progress the band has made this year is astounding,” said Rockwall-Heath High School band director, Ben Sumrak. “I was impressed with their performance for a tough panel of judges.”

Both bands received written comments along with their ratings from the six judges. Three judges were for the stage portion, while the remaining three were in the sight reading room.

“Beautiful phrasing, polished, and very musical!” read the comments from Keith Bearden, Professor Emeritus at Texas Tech University. “Congratulations – you knocked it out of the park today!”

In addition, several band parents and district administrators attended the contest. Many were impressed by the process, especially in the sight reading room.

“The sight reading room completely blew me away,” said one parent. “I can’t believe the students are able to perform a piece they have never seen before with only limited instruction and at such a high level. Very impressive.”

The band directors have many people to thank for their successful performances.

“There are lot of supporting personnel who dedicate their time and expertise to the band to help us achieve excellence,” said Mr. Ousey. “I want to personally thank our campus and district administration, our wonderful clinicians and private teachers, our band parents, and – of course – the talented students that I get to teach every day.”

Now that UIL is over, the band is looking forward to more upcoming concerts, including the Dallas Winds Invitational Windband Festival on April 29th, and the end of the year Spring Concert on May 16th at the Rockwall-Heath Performing Arts Center.