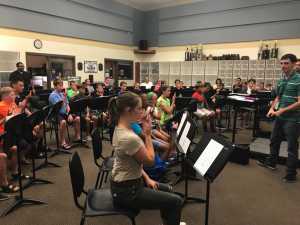 Over 130 sixth, seventh, and eighth grade band students from 12 different Rockwall ISD campuses participated in a special parent show-and-tell performance on Thursday at Utley Middle School. The performance was a celebration of a two-week Jumpstart Camp hosted by the Cain and Utley middle school band programs.

“This camp is an excellent chance for students of all ability levels to get a head start on the school year in band,” said Ms. Loren Taylor, the new Director of Bands at Utley Middle School.

Parents sat next to their beginning band students as the Cain and Utley band staff led a final review lesson. Parents were encouraged to join in on the lesson which included rhythm exercises, breathing exercises, and basic note recognition activities.  In addition to the band staff at Utley and Cain, the camp featured several professional musicians and educators to help the students start on the right track.

“We are so glad the band directors have hosted this camp,” said Kristi Collins, assistant principal at Utley. “We can tell the students are very excited to be in band and we are so excited about the new fight song.” 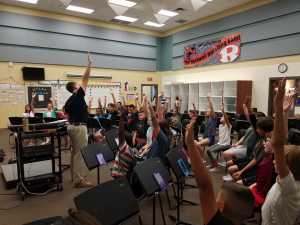 Students are eager to answer questions during the camp

“I had so much fun playing Crunch Time,” said Elizabeth Wade, 8th grade band trumpet player at Cain. “It was so cool playing alongside other students from Utley.”

At the conclusion of the performance, students and their families were treated to Culver’s ice cream courtesy of Culver’s in Rockwall and Mrs. Rupal Vora.

“I am so thankful for the opportunity to teach these students the past two weeks,” said Trevor Ousey, director of bands at Cain Middle School. “We are going to be able to start the school year sprinting thanks to the hard work of the staff and students.”