Cain Honors Band Travels Across Rockwall for a Holiday Tour

It was a brisk Friday morning as members of the Cain Middle School Honors Band began filing into the band hall. Dressed in purple t-shirts and various spirit wear, the students were quiet but excited as they began to take their seats.

“I have been looking forward to the Fall Tour for months!” said eighth-grade trumpet player, Elizabeth Wade. “I cannot wait to play for my former teachers at Rochell.” 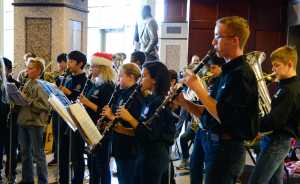 Cain Band and Choir students perform at the Rockwall County Courthouse as part of a six-stop Holiday Tour.

The Honors Band was scheduled to go on a six-stop Fall Tour along with the Cain Varsity Choir. Their stops included five elementary schools and the Rockwall County Courthouse. The day began with a brief 7 AM rehearsal at Cain Middle School.

“Save your chops,” said Trevor Ousey, director of bands at Cain. “We have a long day ahead of us and we want to sound good all the way to the finish.”

As the sun started to rise, the band walked to Pullen Elementary for their first performance. The Choir had already arrived and was setting up the cafeteria.

“I love our Cain musicians,” said music teacher Chris Ghormley. “As a former band student myself, I take advantage of any opportunity we have to share instrumental and vocal music with our Panthers.” 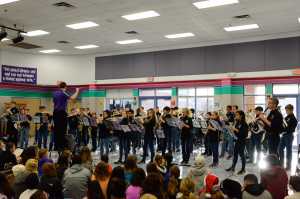 Pullen Elementary was the first stop of the day

Standing against the glass windows, the band played for nearly 100 students at Pullen. For their last piece, the band invited up the 6th-grade band students to join in a special version of Jingle Bells written just for the band.

“They were so loud!” said Jack Makohon, 6th-grade trombone player at Pullen. “Loud and good!”

“It was really cool to play with the Honors Band,” said Skyler McClarry, a 6th-grade flute player. “One of them even said ‘See you next year!’ which was really cool.”

After a whirlwind performance at Pullen Elementary, the band and choir loaded the busses for the Rockwall County Courthouse, where they performed in the large rotunda. Members of the community and courthouse workers lined up along the railings to listen.

“It was by far one of my favorite stops of the day,” said Oscar Padilla, choir director at Cain Middle School. “The acoustics were amazing and the staff was incredibly friendly.” 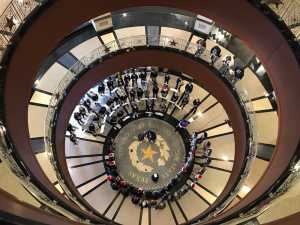 The band and choir proceeded to visit Rochell, Linda Lyon, Amy Parks, and Springer elementary schools with only a brief stop at CiCi’s for lunch. All-in-all, the students performed a total of six 30-minute concerts for nearly 1000 students and community members.

“We were so thrilled to have the Cain band and choir fill us with holiday cheer as they toured through the community,” said Megan Gist, principal at Linda Lyon Elementary School. “The students are so talented; their musicianship and professionalism wowed our students, staff, and parents!”

“It was awesome to play at so many places today,” said Kayla Shrewsbury, a 7th-grade trumpet player. “I especially liked playing at Amy-Parks for all of my old teachers.” 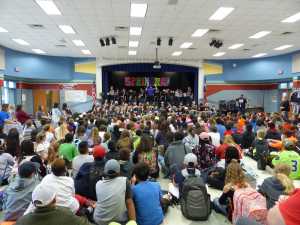 “The kids were fantastic,” said Billy Chan, band parent, and chaperone. “They played great, they were extremely well behaved, and the music was tremendous.”

“I want to thank my colleague, Mr. Padilla, and our awesome volunteer band parents for helping make today happen,” said Mr. Ousey. “I also want to thank the principals at all of the elementary schools for letting us come share the gift of music today.”